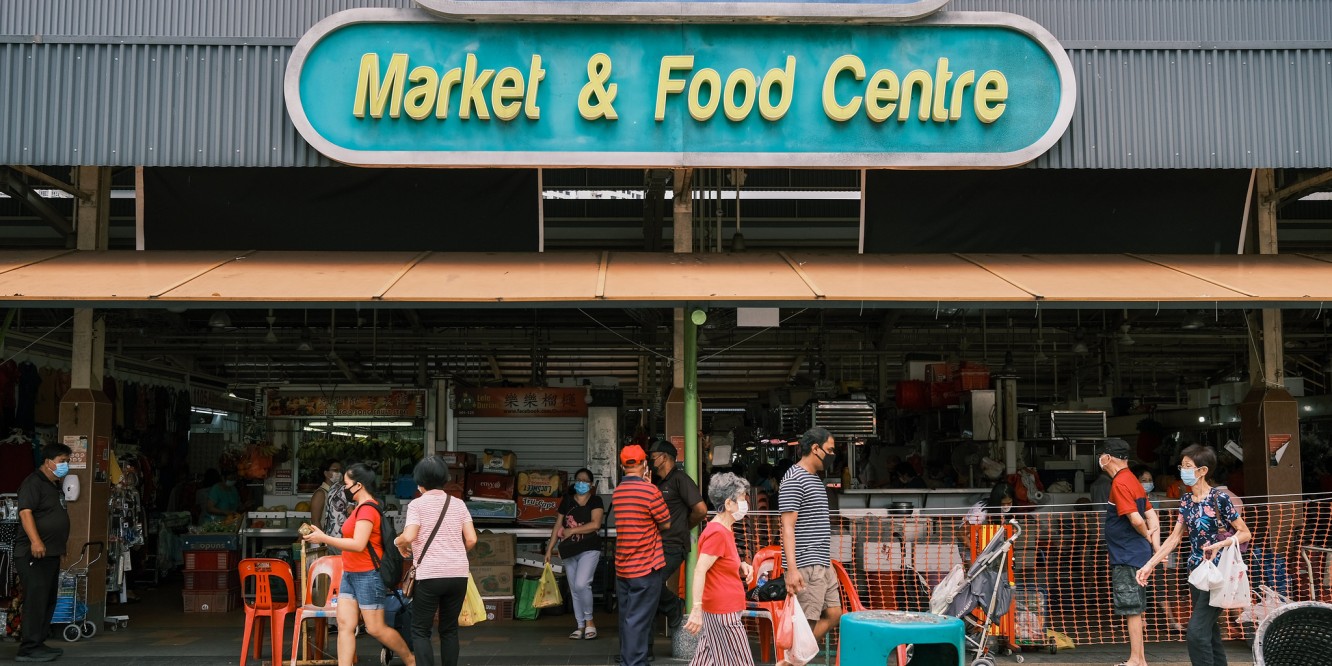 As firmly rooted in Singapore’s history as the story of Stamford Raffles, Singapore’s hawker centres sprang up in urban areas following the rapid urbanisation of the island nation in the 1950s. In many cases, they were built based on a genuine need to address the problem of unhygienic food by unlicensed street hawkers and also provide a variety of food to the (back then) less affluent segment of the population.

* Part I of this series: Exploring Singapore’s Heritage – the Dragon playground is here.

Ghim Moh Food centre (a hawker centre too) is located just next to the wet market (where one can purchase fresh meat / vegetables) and started operation in 1972. This is 7 years after Singapore declared her independence and the food centre has since underwent multiple facelifts and of course, generations of store owners. The wet market side even today at 42 years old is still abuzz with activity from the morning wee hours into the late afternoon.

The sheer amount of product/produce shifting through the wet market to be frank, is mind boggling.

The most interesting part is however, with gentrification and years passing by, the update of the stall owner’s profile across the decades has led the Ghim Moh food centre to now housing at least 10 excellent well-known food stalls that people literally travel across the island to patronise. (you can google for this list)

A first timer to the centre will give one a literal feeling of chaos and bustle, but trust me, this is the raw real hawker centre feel that is slowly being eroded with time as Singapore marches on her way to economic progress.

The profile of the typical visitor can be quite specific to some observers, one of what Singaporeans term as the ‘heartlander’, but then again, one can also argue that the hawker centre is visited by people from all walks of life since these hawker centres are designed to be accessible.

Something interesting is that most of the hawker centres do have a corner where the stall owners as a group pray for good business and prosperity, and Ghim Moh food centre is no exception.

Unlike restaurants where seating and ‘privacy’ is a given, seating at hawker centres and here is purely a ‘first come first served’ basis. And it is very common to have total strangers sharing a table during peak hour.

The stall I patronised is the one that has been said to serve one of the best carrot cakes one can eat is the Ghim Moh Fried Carrot Cake (unit 01-16) and crazily operates for 12 hours straight 6 days a week, with a never ending queue.

My companion had Putu Mariam, a traditional rice noodle dish originating from the Indian states of Kerala and Tamil Nadu and as well as from Sri Lanka. It consists of rice flour pressed into noodles, woven into a flat disc-like shape and steamed.

And the stall name? Aptly named “Heavens” at the same food centre, well known for its excellent version of the ‘appam’ a pancake that looks deceptively simple to make but requires tenacity and experience to make well.

I’ve shown two dishes from two of the ten (or some foodies say twelve) popular stores here (the food centre actually has room for 72 food stalls) , to end off let me challenge you to find the remaining eight (or ten) noteworthy stalls.